A performance video using a recently leaked speech from John Redwood, an advisor of the conservative party at the moment England was preparing for the deragulations of the their financial markets in the 80's - also known as the Big Bang. John Redwood speaks of these then yet to be realized plans by making use of an allegory placed in the middle ages. Traders on the stockmarket take the part of noble knights who live in the stockmarket castle and fight against institutional barons and unknowing peasants outside the castle (the people). 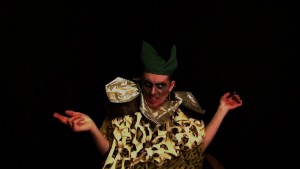