Performance during the exhibition Life of an Artist in HEAD Geneva

A performance, using the recordings of the parapsychologist Konstantin Raudive. Raudive recorded silence on tape and found out, as he played the tape that sounds were audible. He came to the conclusion that these sounds had to be voices and that these voices belonged to people that had already passed away. The performance consisted of transmitting the sounds he recorded by means of a radio signal and receiving these sounds via a speaker that was placed in my mouth, emitting the supposed of speech of the dead. 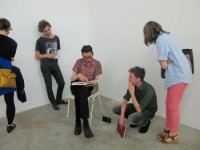